Around 1440, two notable schools were founded…ours and Eton.

Our first benefactor, John Fereby, left a sum of money to found a school in Chipping Campden. The school opened with about seventy pupils; all were male and of wealthy parents. Latin was the most important subject and the school day was twelve hours long.

In the early 1600s, Sir Baptist Hicks had legal documents drawn up that protected the money left by John Fereby and ensured that it was spent wisely and for the purpose it was intended. Also, he had the Baptist Hick's Room built, which still stands in Campden High Street, and where most of the teaching took place for many years.

In the late 1600s, George Townsend left money in his will to provide a scholarship for a Campden scholar to go to Pembroke College, Oxford. Many students have benefitted from this endowment over the years. He also left other money to benefit the school.

Together, Fereby, Hicks and Townsend are always remembered. Allegiance to Fereby, Hicks or Townsend House is a part of school life for every student. 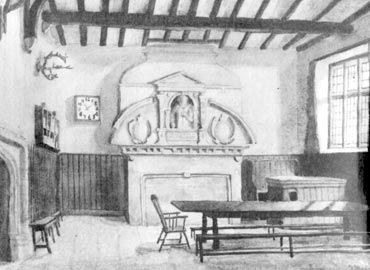 By 1856 numbers had dropped significantly. There were only thirty boys in the school, including four boarders. Seven were learning Latin and eight learning Greek. Conditions were very poor as the two story building built in 1630 by Baptist Hicks was still the base for the boys' accommodation and learning.

In 1862, after a public appeal for money, the Old Grammar School and Headmaster's House were built; their facades remain a dominant but beautiful architectural feature of the High Street. The new premises attracted a rise in numbers to over sixty boys in 1880 but by the early nineteen hundreds the numbers had once again fallen to thirty seven, with only eight boarding.

By this time, scholarships had become available across England which provided free places to boys whose parents could not

afford school fees. Some of these became available to Campden boys but numbers remained too low. Against much objection by the governors, but to address the problem of a falling roll, girls were admitted in 1906.

By 1919, one hundred and eighty five scholars were being taught in buildings built for less than eighty and many lessons were taught in local hotels and the Town Hall. It became obvious that the school needed a new site and, in 1926, land was bought and by 1928 the new school was in use. It was a school of six classrooms, which are still in use today for teaching maths and make up a large part of what is now called "Central Block". By 1939, the school had two hundred and fifty students…still being taught in the original six classrooms!

Chipping Campden School was a grammar school until 1965 and on 30th September, Campden School became "comprehensive". It opened with seven hundred and seventy five students and forty two full time staff. By 1976, student numbers had reached over nine hundred.

In the early 1980s a tradition began. The whole school walked the length of the Malverns to raise money for charity. The "whole school charity walk" remains a biennial event for the school but a more local route is "enjoyed".

The lino on Central Block floor was lovingly cared for using wet tea leaves and elbow grease but, by the mid 80s, walking around the school became quieter as classrooms and corridors were carpeted and the lino gradually disappeared.

Perhaps a more important landmark of the 80s was that in 1988 the Old Grammar school was sold. This had been the Head Teacher's residence for many years and, therefore, PT Sandry, the Head at that time, had a change of address. On his retirement the new property was also sold and all new heads are now responsible for finding their own accommodation.

During latter years the school has enjoyed major improvements to its fabric. The IT, art and music blocks and purpose-built sixth form centre have added to the footprint of the school.

Around 2012, we have moved from "school" to "academy", pupils have become students and we are a family of almost twelve hundred young people and over one hundred staff. The curriculum is varied, Latin is no longer on the timetable and the school day is about half as long as it was when the school was founded. We work and learn in a cashless society with finger-tip recognition and can't imagine our world with out ever-changing technology.

I wonder how our history will develop over the next five hundred years?