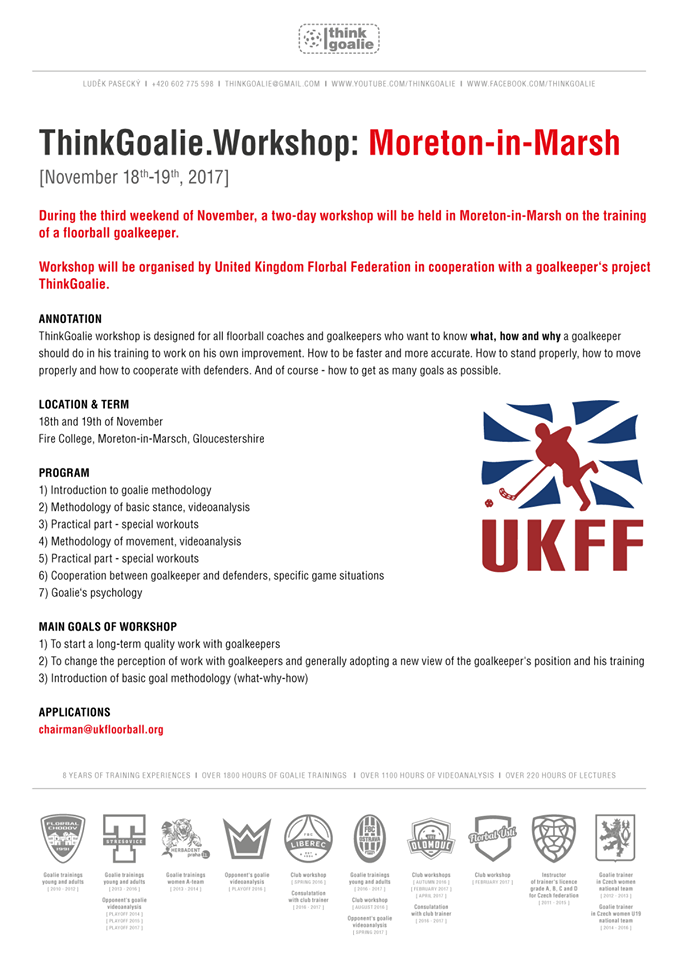 UKFF will NOT offer accomodation and meal, but if you would like to stay overnight at the Fire College or have a meal, you can book both by contacting Nick Akerman (This email address is being protected from spambots. You need JavaScript enabled to view it.).

Minimum attendance is 20 people who must send the registration form to This email address is being protected from spambots. You need JavaScript enabled to view it.
and send the whole fee due to the UKFF bank account
(sort code 40-02-45; account 40164763) before 23rd of October 2017.

The Cotswold Foorball League Girls' Competition started tonight. The CCS girls continued the fine form shown by their mixed team with three wins. The first game proved to be the toughest, St James giving very little away. Niamh Curzons, usually a goalkeeper, was placed in the forward line and proved to be adept at the job. She opened the scoring after a spell of constant pressure Olivia Peachey then tucked home a rebound to make it 2-0 before St James pressed forward themselves. Goalkeeper Mery Sutherland was forced into two excellent saves. The seniors' third goal followed a good bit of work up the right wing by Grace Matthews, her pass to the far post being deflected in by Peachey. Eventually St James scored through Isla Weeks-Coleman, her shot from a narrow angle evading Sutherland at the post.

CCS had an easier time against St Catharines, quickly going 3-0 up. Skye Drinkwater, Ruby Farrell and Drinkwater again scored. St Cath's came back, forcing the CCS defence into action, only to succumb to an unlucky goal when Peachey's shot from far out bounced off everything in sight to roll over the line. St Cath's started to attack more, deservedly pulling one back when Martha Robinson converted Claudia Evans' pass.

CCS expected holders St Davids to give them a stern test. Drinkwater netted twice against her old school, sandwiching a score from Curzons. Matthews made it 4-0 to complete what turned out to be an easy victory.

Goalkeepers Emily Whittingham (St Catharines) and Evie Hall (St James) were the stars in what turned out to be a 'no-score draw' between their teams, but could so easily have finished high scoring. St Catharines v St Davids also appeared to be heading for a goal less draw, this time with very few chances. Everything happened in the final seconds when Evans gave St Catharines the win.

The night's best game was between St James and St Davids. St James went ahead through Weeks-Coleman. Winnie Brazil scored the goal of the night to equalise, smashing the ball to the roof of the net. Weeks-Coleman opened up the lead once more and Skye Hall made it 3-1 for a win which put St James into top qualifying position.

On 31st October, after the half term break, the 'B' Team League matches start when CCS, Blockley, St James, Willersey and a hoped for 'mystery team' meet.